Somebody sent me her recycling! 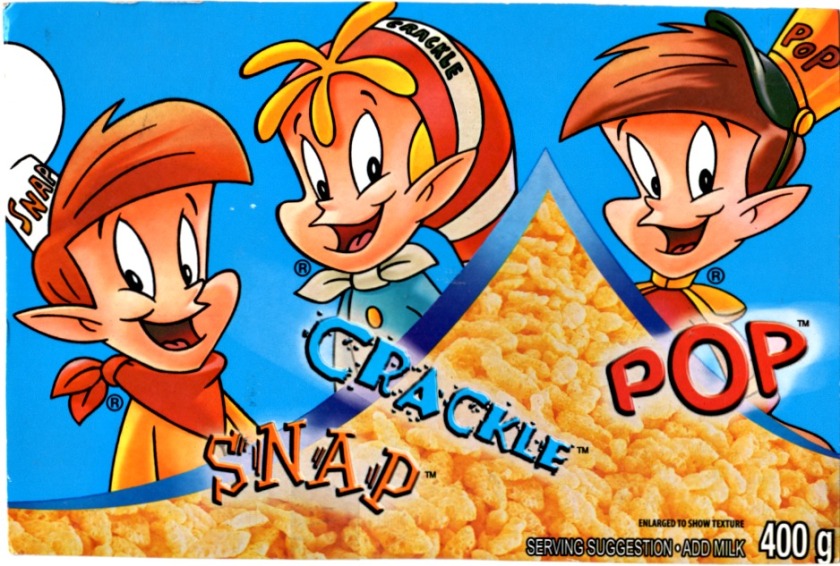 –Just as she was supposed to!  It’s another “chunk of cardboard” trade via swap-bot, & this one came from Brakpan, Gauteng, South Africa.  Really cool to see her country’s Rice Krispies packaging.  I’m pretty sure that’s somewhat different than the character & box design we have here in the U.S.  Yes, I am entertained by that sort of thing, and yes, I DO walk the supermarket aisles when traveling abroad!

There is so much going on, on the flip side of the card, I had to share!  Love the stamps, most especially the fish. 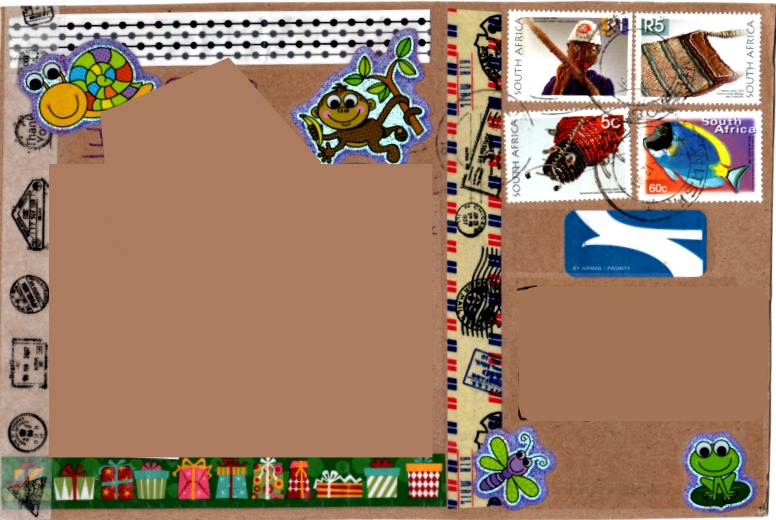 Three cards in through Postcrossing!

That onager came from Neukirchen bei Sulzbach-Rosenberg, Germany.  The sender likes that my Postcrossing profile is a profile, rather than a “I want” list:

“I’m happy to write to someone who is not just making commands about the stamp, layout, or something else.”

The smiling children were sent to me from Brits, South Africa, and four beautiful words she wrote are making me feel very jealous:

The images from Nurmes, Finland, come from a Postcrosser in Oulainen, Finland, and as jealous as I am of my correspondent in South Africa, I feel the opposite way toward this guy: 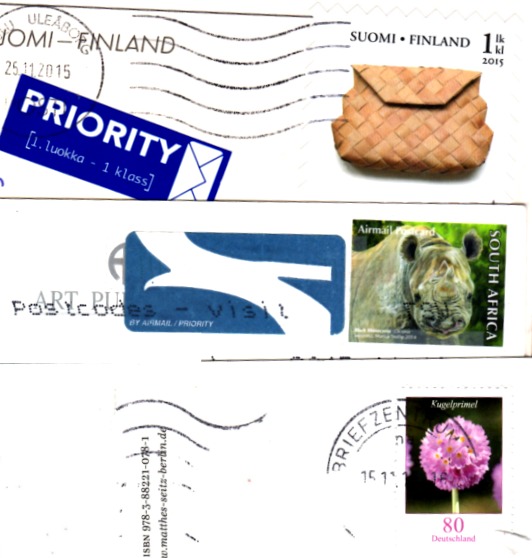 Time to send out the recycling again!  It’s another swap-bot “Chunk-O-Cardboard” trade. 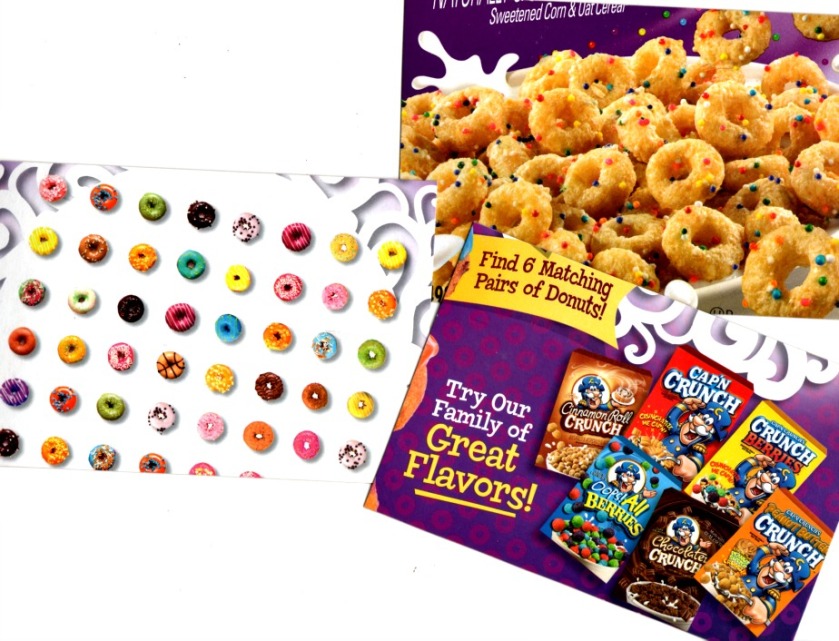 This time, all of my postcards were fashioned from a single cereal box, Cap’n Crunch Donut Crunch.  When I saw it at the store, I decided I had to try it.  I don’t know why; maybe I was subconsciously thinking about what cool postcards the box would make.  As for the stuff inside?  TOOOOO SWEEET!  Nobody who tried it could work with it; I ended up dumping it out–probably the best-possible solution.

These lovely cards are already off in the mail, heading to swappers in:

A sampling of the stamps I used:

Whoa, I got a card this week from Rwanda!

The only postcard interaction I’ve previously had with Africa was with South Africa.  Usually with Postcrossing, it’s EuropeEuropeEurope, so this was a thrill.  I can tell that getting a card from Rwanda is a true Postcrossing rarity, as their ID codes are still below 200 (compare that to 7-digit codes for U.S. senders).

The card is from Kigali, Rwanda, and the sender tells me:

“Greetings from Rwanda, a tiny country in central east Africa.  It truly earns its nickname of Land of a Thousand Hills.  Two big exports are coffee and tea.  The leaves are picked by hand.  This country has come a long way in 20 years but there is still a lot of poverty.”

Getting back to EuropeEuropeEurope, the Vanity Fair card is from Hagen, Germany, from a sender who has herself been on a long, strange trip:

“A few days ago, I returned from a journey to New Jersey, Maine, and Canada.  Everything was great – the people, the countryside, the hotels…”

Finally, there is the still life, and a story to go with it.

That card is from Minsk, Belarus, and it reads:

“I don’t know that about what I can write to you.  My tastes are very unusual.  I love traveling.  I traveled almost half of the globe. You can send me a postcard with interesting places of the area where you live.”

Wha’?!?  No, and here’s why: don’t tell me you don’t know what to write to me–and then ask me to send you something!  Also, the postcard was half-blank: the solicitation you see was followed by blank space equal in volume to the part of the card which bore writing.  Also missing: the Postcrossing I.D.  I had to go through the process on the website to provide all the information about the card I could, so that the Postcrossing detectives could hunt down the sender.  Which they did.

Now that I was able to go in & see who she is, I can see she is quite new to the game: she’s been in just over 2 weeks, and mine is only the second of her cards to have “landed.”  She also looks quite young: perhaps preteen.  Of course, that is no excuse whatsoever: I certainly could have managed to bang out more than 3 lines on a postcard before I started in with requests.  I am relieved, though, that this was not an adult 300 cards into the game sending out something like this! 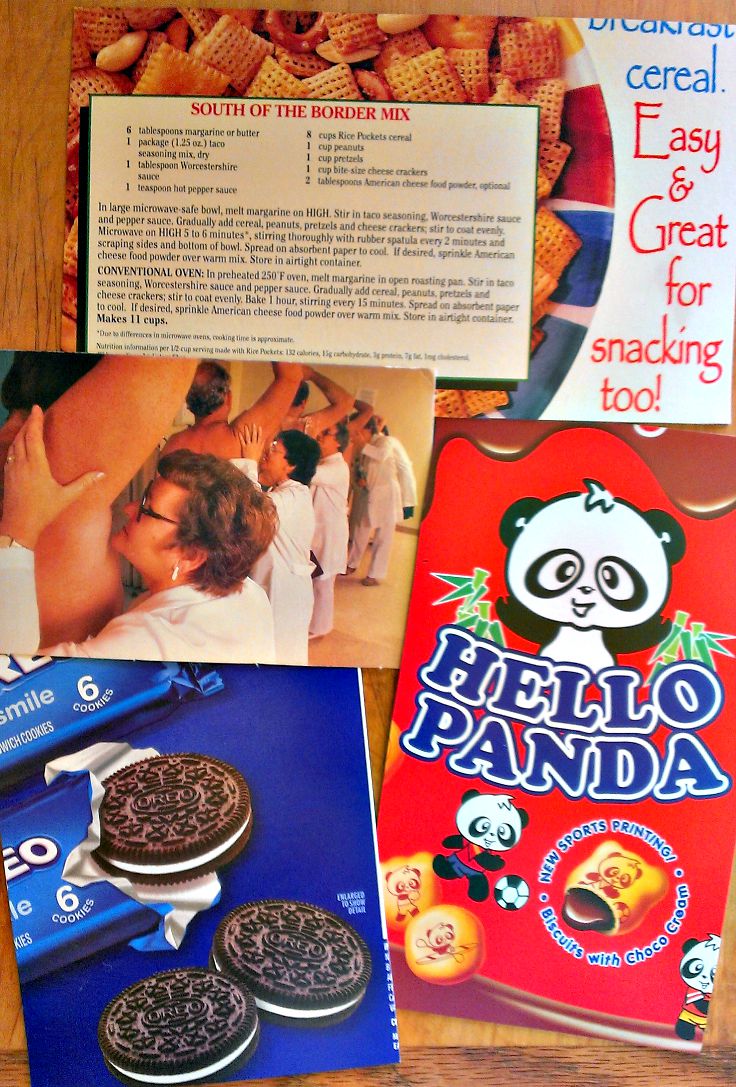 You just know those folks in the lab coats did something horrible in their previous lives to deserve this job.

All swap-bot in this batch, and 3 of the 4 for the “chunk of cardboard” trade.  The fourth is for a swap called “butt-ugly postcard,” and I pulled it from and old book from Klutz Press called “The World’s Tackiest Postcards.”  So glad there have been a couple of swaps worthy of these  tacky cards–otherwise, I would have had to mail them to my friends!

The “Greetings from Tea Partyland” postcard went to Raleigh, North Carolina, to the postal art blogger known as Dear Detective!  It’s a thanks for the postcard she sent me, shown here a few days ago.  This card was sent to me in a mailing by the Democratic Governors Association, bearing a pre-written message so I could mail it to a friend and scare them.  I slapped on a new backing so that I could write my own message, and I also glued on that cute, friendly little character from a bag of taro chips.

The next two cards are regular Postcrossing draws.  The birds will be flown (I assume) to Cape Town, South Africa.  The user’s profile photo shows her looking at the camera through a pair of binoculars, and she says birding is one of her new hobbies–so I found the birdiest card I could.

Lastly, that little peek of San Diego is headed for Joensuu, Finland.  Most of the cards marked as favorites in her Postcrossing profile were scenery-type images, and this was the closest I felt I had at the time to what she was looking for (though she does write, “The joy comes when the cards around the world. I’m glad all the cards…”).

Another round of one of my favorite swap-bot trades, the amazing chunk of cardboard!

It’s 3 countries in one: Canada Dry, being sent from the United States, to South Africa! Brakpan, South Africa, to be precise

Brakpan is a gold and uranium mining town with 346,735 inhabitants in the Gauteng province of South Africa. –Wikipedia

I have a hard time thinking of ginger ale without thinking of that classic drink, the Shirley Temple, so I mentioned that in my note to this card’s recipient.

The panel with the photo of a Sluggo toy came off a box containing a Sluggo toy, and I sent this card to a swapper in Goose Creek, South Carolina.  She describes herself as a fan of toys & comics, so I am hoping she will enjoy this.

Finally–freezer-to-mailbox–there are the garden veggie patties (well, just this part of the box), now on its way to Palm Coast, Florida.  I don’t know if the person getting this is the type who is afraid to try new things, but I told her that one thing I like about this product is that it does not try to replicate the taste of meat (a la Boca Burger).

Some very special, unique postcards just in–hewn from food packaging of one kind or another. 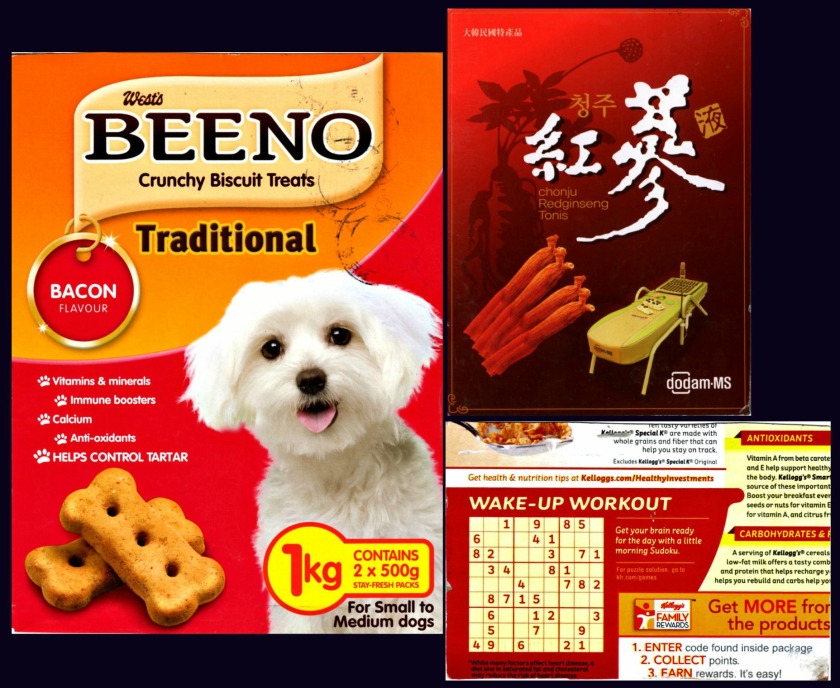 These are presented in exact proportion to one another. The two postcards to the right are actual postcard-size. What I am saying is, that doggie card is HUGE. Spanning my hand wide along it, it reaches vertically from the tip of my middle finger, on down, well past my wrist bone. Horizontally, my thumb & pinkie do stretch beyond the edges, but I am unable to grasp the card without bending it. Huge, I say.

Did I mention that the card cut from the box of dog biscuits is huge?  Well, it is.  It was sent to me as part of one of my favorite swap-bot trades, the Chunk O Cardboard swap.  It arrived from Brakpan, South Africa–becoming not just my first card from that country, but also my very first from the entire African continent!  Wikipedia tells me that Brakpan is a gold & uranium mining town in the province of Gauteng, and that…

The name Brakpan was first used by the British in the 1880s because of a non-perennial lake that would annually dry to become a “brackish pan”.

The “chonju Redginseng Tonis” card was sent to me from Kuala Lumpur, Malaysia, part of a food package postcard tag in the Postcrossing Forum.  The sender helpfully tells me,

“this is red ginseng tonis from Korea, it was bought by my mum from Dodam thermal massage bed company.  They have their branch in Malaysia though.”

Massage bed–so that’s what that other thing on the box is!  Couldn’t tell if it was some kind of odd remote control, or what!  Doesn’t look too relaxing, but maybe the ingestion of ginseng is what makes that happen for a person…

The wake-up workout comes to me from somewhere in the Jacksonville, Florida area, another swap-bot chunk o cardboard.  “Do you sudoku?,” asks the sender, “I can’t even spell it.”  In my thank-you message, I let her know that I used to sudoku quite a lot.  I did this because I’d heard it’s good for the brain, but then I finally stopped when I realized it was curtailing my reading time.

Stamps!  Some really nice ones, and if you’ll notice, there is a bird representing each of the three countries. 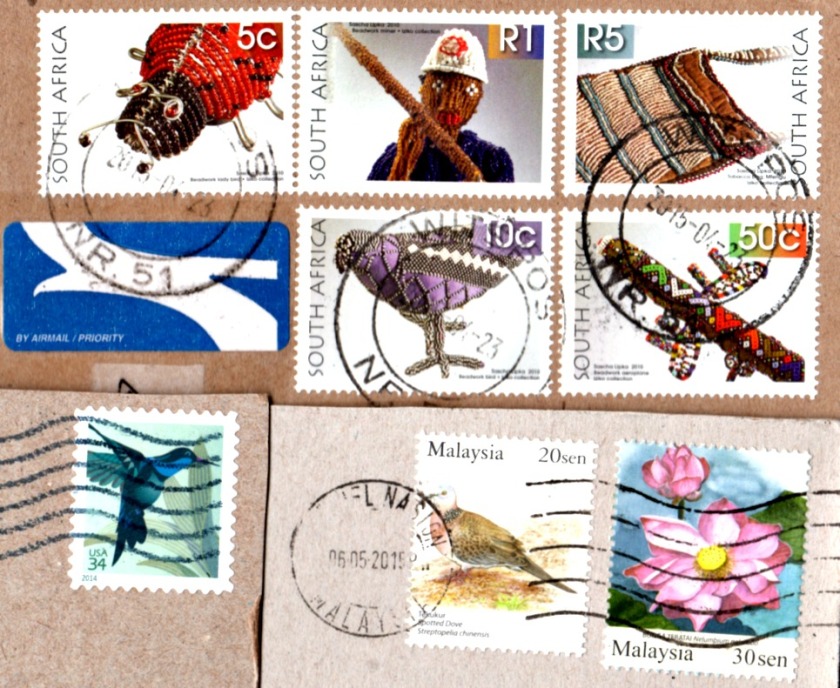 Just sent out several through Postcrossing…

Astro and his beach-combing dogs (captured at Duxbury Reef Reserve in Bolinas, California) go to Johor, Malaysia, where the card’s recipient says he likes comics.

Bleiswijk, Netherlands is the destination of the book cover card.  The Postcrosser was a bit of a cipher in her profile, and I decided, thus exactly the type of person who might like that card.

The beautiful Doraemon card is awarded to a user in Riga, Latvia who, I think, said something about liking landscapes.  The landscape on this card, by the way, is at Punalu’u Black Sand Beach on the Big Island of Hawaii.