Starting with the stamps, stickers, & tape this time, just because they are sooo cool.

I love those Japanese stamps, both the Peanuts & the tempura.  Those, & the tape, came on what has to be one of my favorite postcards I’ve received since my start in Postcrossing & swap-botting not much more than a year ago.  The postcards are below, and the wonderful Snoopy card came via a Postcrossing Forum “Snoopy/Peanuts tag” from someone in Tokyo who tells me her favorite Peanuts character is Woodstock.

The oddly-named bathing beauties, and the shiny goldfish sticker, come from around Kansas City (I don’t know which one), thanks to a swap-bot “weirder than weird” trade.  The sender mentions toy photography (a silly pastime of mine): she tells me she got a Moomin advent calendar, and took photos like mine with them.  Cool!  I’d like to see that.  Moomin are funny.  They have characters they call trolls, that look just like hippos.  I like hippos.

Finally, from the Little Rock, Arkansas area, comes that chunk-o-cardboard, through one of my favorite (okay, my absolute favorite) ongoing swap-bot trade.  I neglected to photograph the washi tape on the back, which looks like a colorful circuit board 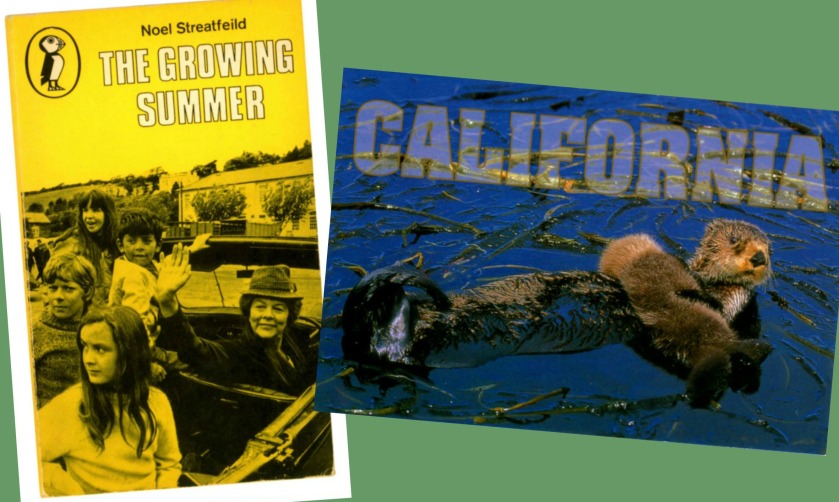 The book cover–from my dwindling box-full-‘o’-book-cover-postcards–is part of a swap-bot “what are you reading” trade, and goes to Morrilton, Arkansas.  The card’s recipient is a teacher who says she would love to be able to make a living reading.  She belongs to a book group, and I assume is one of those book-club people who actually reads the book!  She leans toward Stephen King & fantasy books, and if there’s any genre she dislikes, it would be self-help.  Yeah, those are a waste of paper & brain space!

I’m telling my swap partner about the book I am just wrapping up, Return to a Sexy Island: Notes from a New Singapore by Neil Humphreys.  Humphreys is a Brit who lived for several years in Singapore, and wrote witty accounts of the culture shock awaiting an outsider settling into life in that island nation.  When I visited Singapore some time ago, I bought an omnibus edition of his three books full of island ruminations, and I really enjoyed his writings–and perhaps despite his best efforts, learned something from them!  Humphreys and his family moved to Australia for a time, but in this new book, he is back in Singapore, exploring anew & sharing his thoughts on the country’s “sexy” changes.  I want to read more of his writing, Singapore-related or not–and now I have learned he has just published a new book, a crime thriller called Marina Bay Sins!  A very funny title, by the way, and I am so there.

The card on the right goes to Kobrin, Belarus, to a Postcrosser who says she loves traveling, crafts and photography.  She suggested people look to her favorites to help decide what postcard to send her.  I looked & saw several animal cards, and so I decided to send her one of my favorite animals, the sea otter.  By the way, the Monterey Bay Aquarium has a live Sea Otter Cam, and the sound turns on whenever they do a public feeding.  I watched for a time yesterday, and after the afternoon feeding I saw one of the four resident otters settle into a wheelbarrow full of ice!