I’ve recently done some transgressing in my postcard life.

It all started when I signed up for one of the Postcrossing Forum “you choose” threads, in which the person tagging you makes a selection from cards you offer.

And I could not find the card selected by the person who tagged me.

I was SURE I still had the card the person selected.  So I looked for it.

FOR WEEKS, I looked for that card.

It shouldn’t have happened, and it felt bad, but that’s what happened.  I was just so sure it was waiting for me to find it.  In fact, now that I’ve mailed something else to my poor tag-mate, I’m still fairly positive that postcard will jump out and say, “SURPRISE!”

Then came the swap-bot debacle.

I went on a very nice little vacation recently, and while I was gone, a swap-bot trade for which I’d registered opened up for swapping.  And before I’d returned, the “send-by” date had come and gone–all of this without me realizing it.

At some point, months ago, I had tried to adjust my swap-bot e-mail notifications, so I wouldn’t get trivial emails from them every five minutes (I really don’t want to know, “helpful” mod, every time there is a sale at Joann’s Fabrics.  I DON’T CARE).  It didn’t work; I still get the nonsense emails, but NOT the ones that keep me informed about swap deadlines).

Anyhow, if I had been keeping track of swap-bot, and my own calendar, this would not have happened.  But when I came home to see I had for the first time missed a swap-bot deadline, I got down to business.  I was to have sent each of my two partners a single postcard, but instead I sent them each four, along with extras, using their profile as a guide: 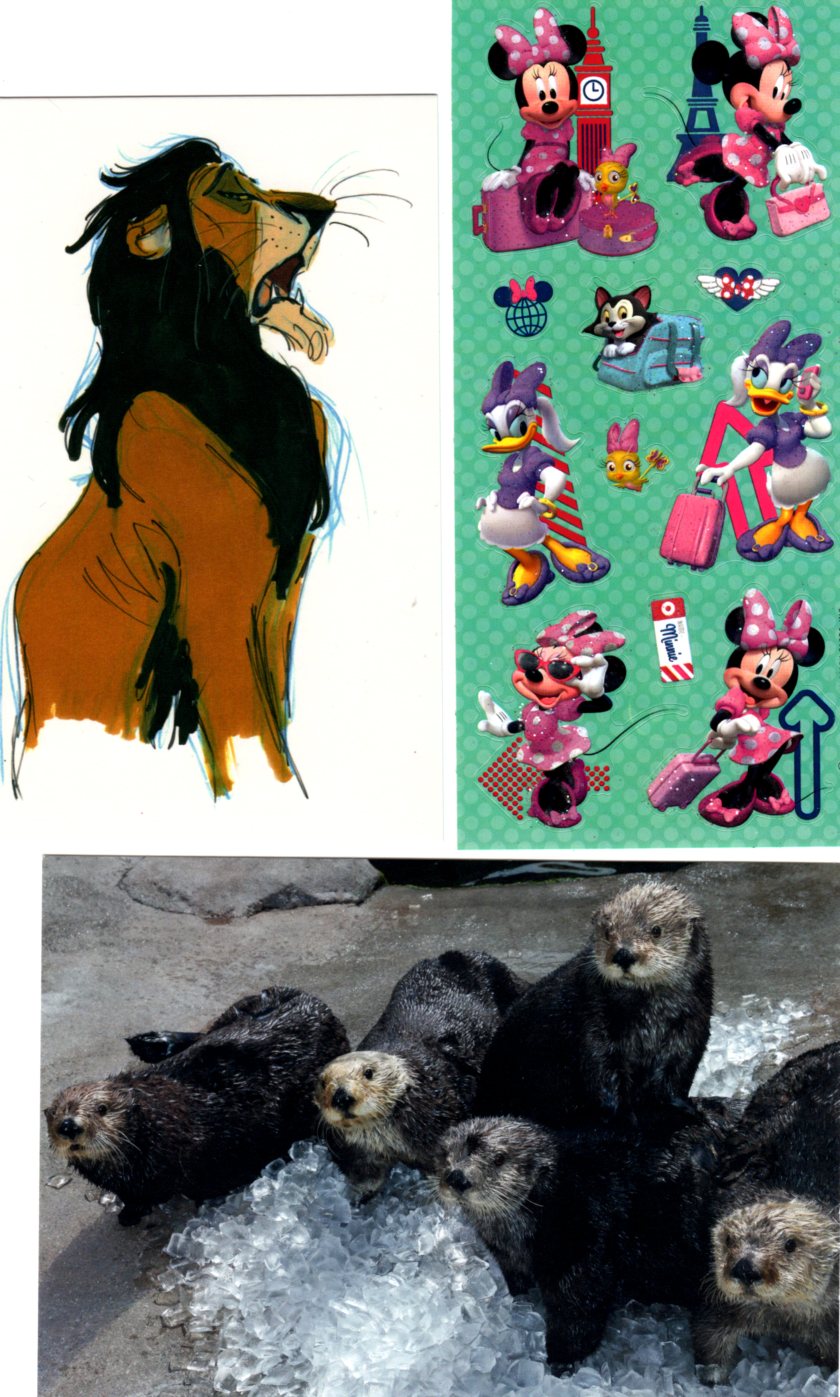 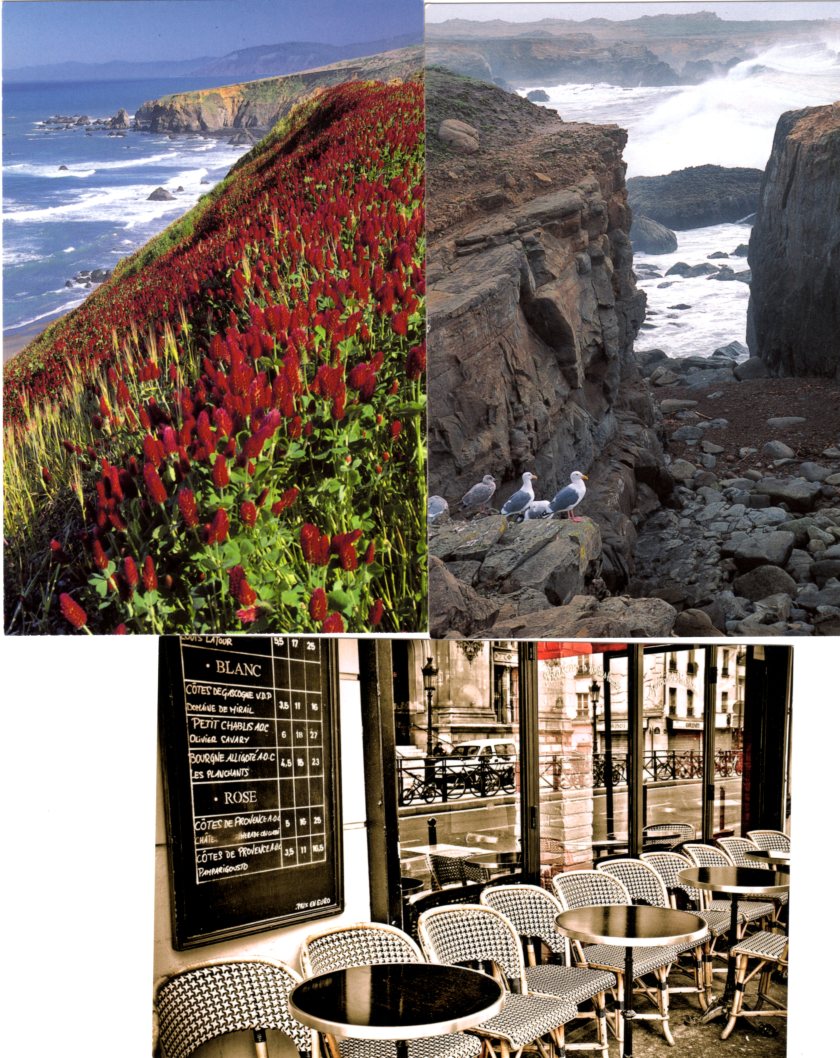 I also sent each of them a message (and a message to the swap admin, too) to apologize & let them know the actions I was taking.  I got three very kind & understanding messages in return.

Have you ever found yourself on the wrong side of postcarding law?  Feels so bad, am I right?

It’s a good time to try to think of pleasant things.

I have some catching up to do!  Let’s start with these cool new postcards I bought, two of which have long-since gone out to post pals in Japan & Hawaii. 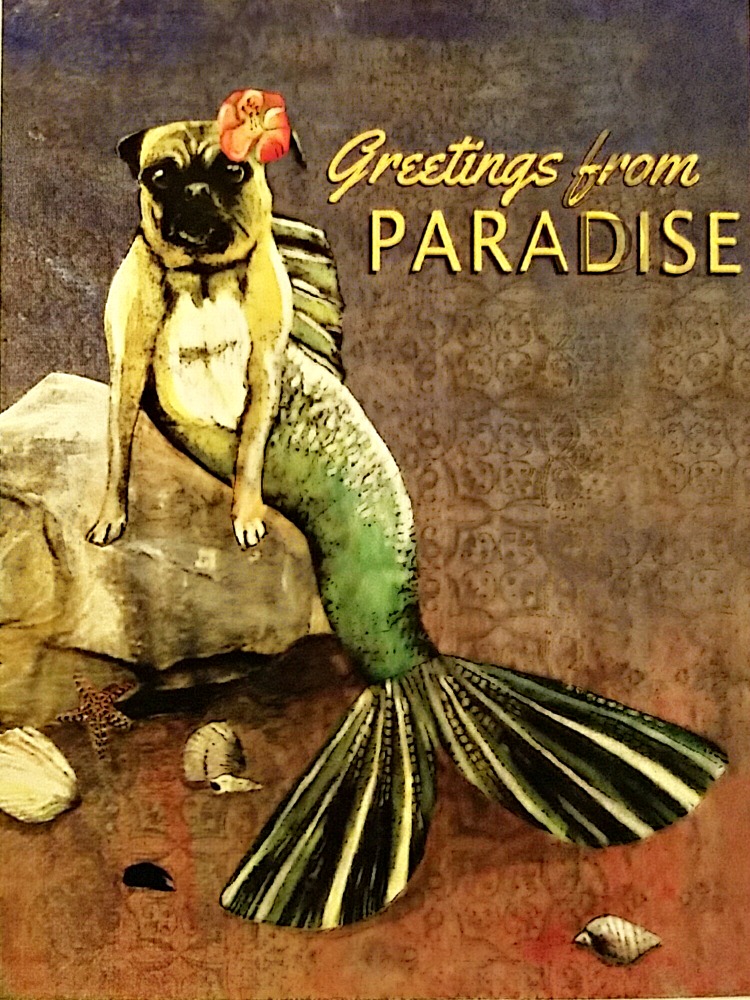 This mermaid smells like a wet dog.  And fish.

Later, I made envelopes to send more stuff to the same two people.  This one I made from a photocopy of an old comic book cover, & sent off to–can you guess?

Yes, Hawaii!  And here’s the back-side of the envelope.

Inside went some stickers, a note on a postcard, and an old brochure I unearthed.

That piece of advertising has to be 35 years old, at minimum.  When I unearthed it, I had to do some online research to see if the place still exists.  It does!  Here’s the rest of the brochure: 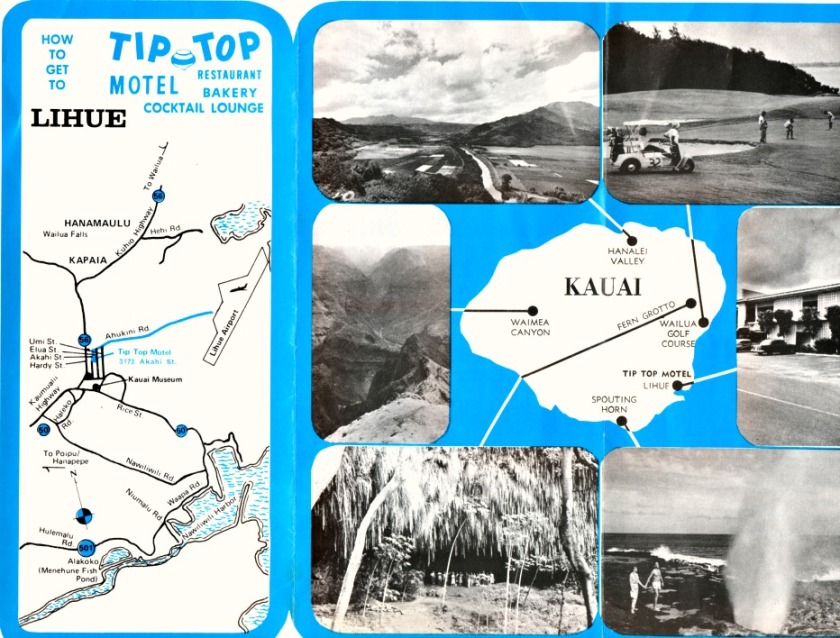 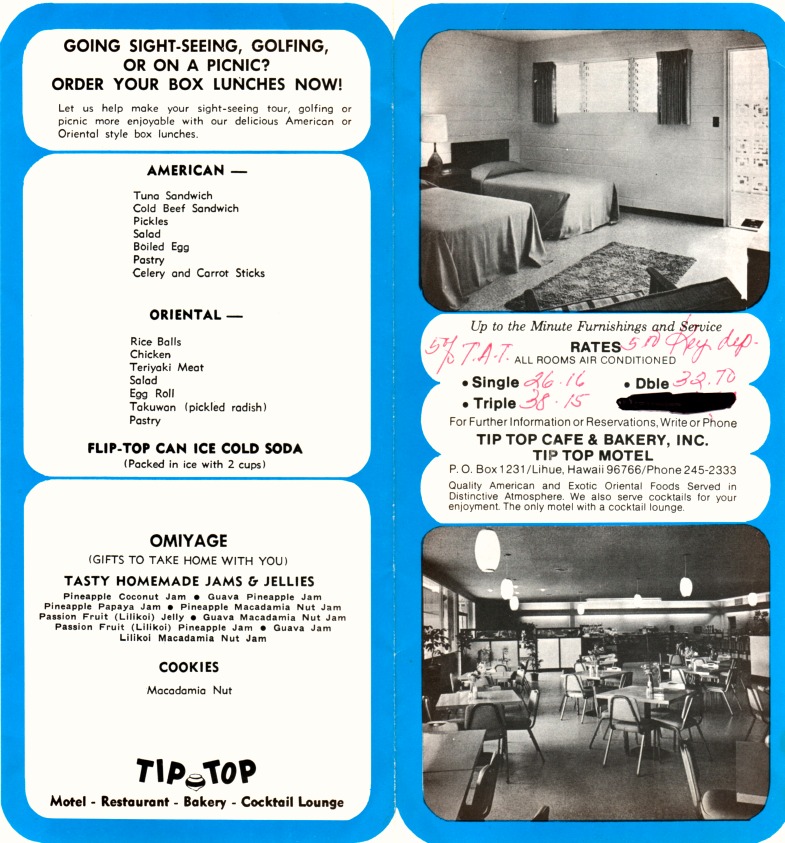 I asked my friend if she’d been there.  She has, to the restaurant–it’s a cheap place to eat!  I’ll have to remember that, the next time I’m in the neighborhood.

Here comes the other envelope I made, this one for my friend in Tokyo:

I enclosed another sheet of those Peanuts stickers, plus a note on this postcard:

Here are more postcards that went out, these for Postcrossing Forum & swap-bot exchanges.  Off they went to Hoofddorp, Netherlands; Goleta, California; Taichung City, Taiwan; and Tsukuba, Japan.

Finally, have a look at the stamps, stickers, and washi tape!  I think it might be time for me to restock my stash of fish stickers!

Usually, I wait until I’ve sent out a few things, before I try to recapture the whole lot of them to share here.  This morning, though, I put something together for a Postcrossing Forum tag trade to Hong Kong, and I just couldn’t wait to share.

This envelope I made first entered my life earlier this week–through my mail slot–as the cover of a magazine.  As soon as I finished reading the mag, I started sizing up the cover for its possibilities as an envelope.  It turns out the possibilities were quite good!

The Postcrosser in Hong Kong did state a preference for envelopes.  I don’t normally pay any attention to that.  Having seen that she likes Peanuts postcards, I was going to just write, address, & stamp this one, and drop it in the mail “naked,” as the postal deities intended…

…until I saw this line in her profile, where she suggested what people might talk about in writing to her:

“You could try to tell me…your favorite pizza topping.”

This is exactly the point at which I decided I would make an envelope, and stick my postcard in there–along with a menu from my favorite pizza place. 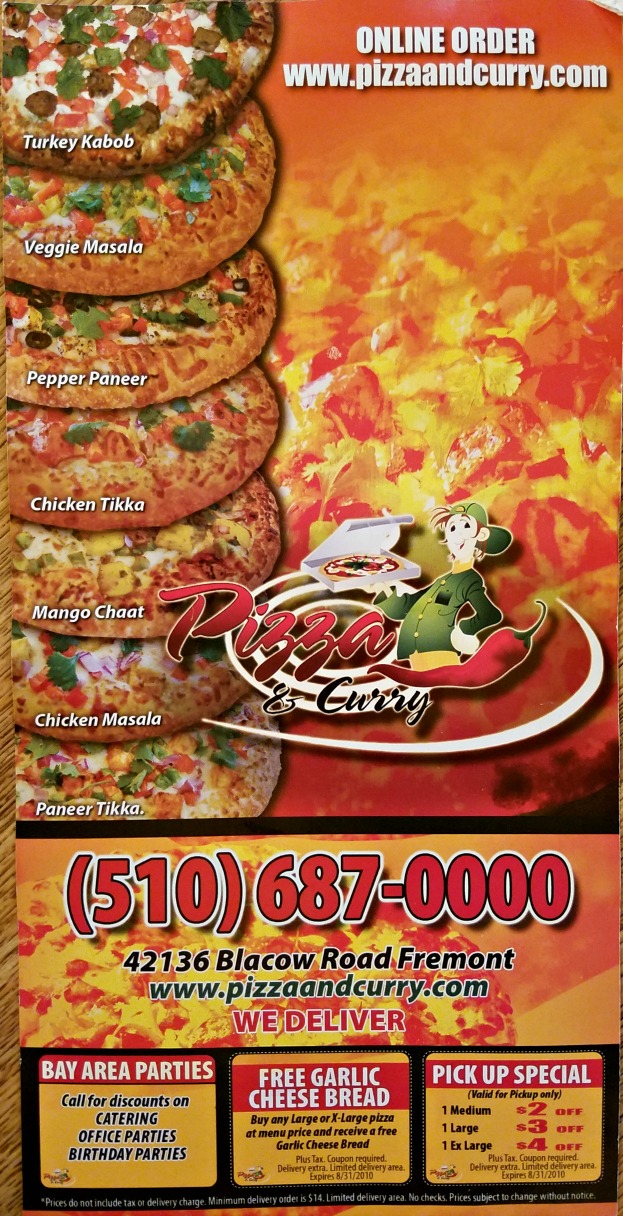 I can recommend anything from section 2 of this menu, two of my faves being the Paneer Tikka and the Tandoori Potato.  And as I told this mailing’s recipient, Pizza & Curry is just (I think) the first of many places now in the area that serve up pizzas with Indian flavors.  So good!

I think I’ll order one on Monday.

This is all for another swap-bot stamp trade, in which we are to send our assigned partner 25 postage stamps, old or new (I sent 32).  This is on its way to Silverdale, NSW, Australia.  As I’ve mentioned, I don’t even collect stamps. I think–no, I KNOW–I just want the chance to use some of these envelopes I’ve been making out of worn-out, discarded library books.

As far as the stamps go, I really DO like one of these: it’s the bright yellow stamp from Finland, with the happy fir trees.  Do you have a favorite?

More reading & recycling (that might have come off differently than I meant it; read on, and you will understand)!

Hey, I got another gigantic skull from Phoenix, Arizona–and I think this one might be even cooler than the last one!  It’s from the same swap-botter as before, in another chunk-o-cardboard trade.  The sender tells me, “this was actually a mask on a stick, but I knew it would be the perfect size for mailing.”  Love it!

The dog dancing over a colorful patterned background, that’s from Seatac, Washington, and it arrived via a swap-bot trade in which we were to share what we are currently reading by copying a page midway through the book.  My trading partner here did so by transcribing by hand page 50 of Ender’s Game by Orson Scott Card.  Not everyone has access to a printer, making participation in a swap like this something one really wants to do!  I wanted to share this homemade envelope, which I think is very cool; it’s legal-size, and when I peek inside, I can see her tracing lines, which makes me appreciate it even more.  The dog sticker is icing on the cake!

I love those hippos.  I was enthusing over them on another mail enthusiast’s blog, and before too long, I had a Chocohippo chunk-o-cardboard all my own!  She sent it to me from Geel, Belgium.  If I ever find myself in that country, I will have to try this product for myself!  By the way, this card follows in the theme of “what I’m reading:” the sender tells me she is working her way through Secret of the Dragon by Margaret Weis &Tracy Hickman. 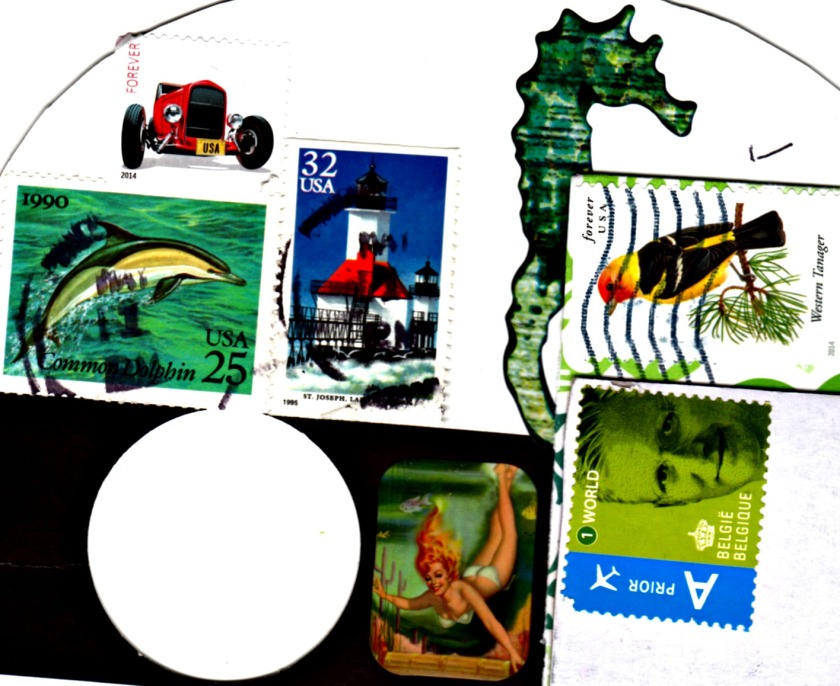