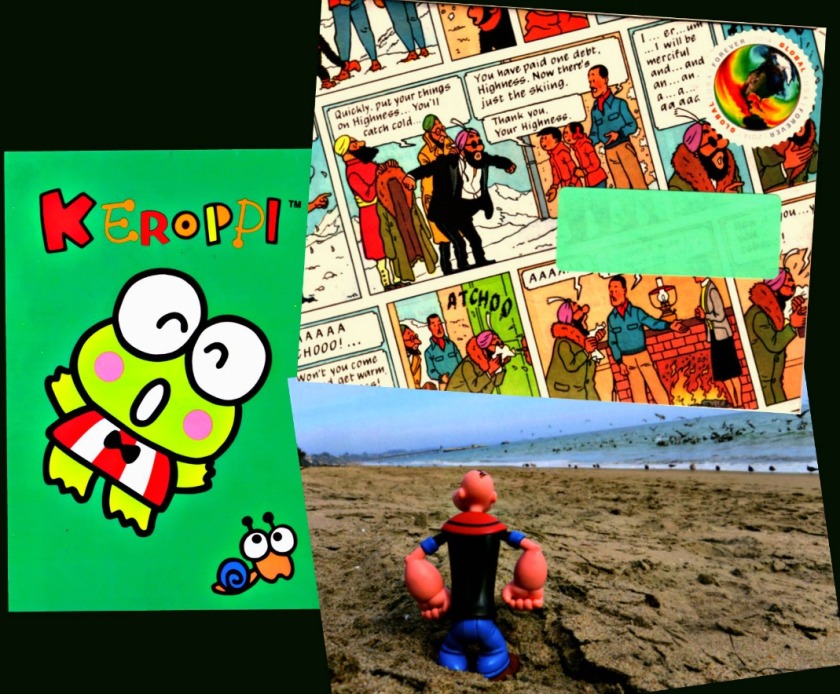 Working counter-clockwise from the frog:

Keroppi is on his way to a Postcrosser in Radstadt, Salzburg, Austria, who helpfully lists the postcard likes of her grandchildren as well as herself.  I mail this knowing I can make someone in the household happy, despite the fact I don’t have a Charles & Diana card for the addressee!

Popeye goes to a Postcrosser in Guanghan, Sichuan, China.  Wikipedia tells me that the city’s main industries are tourism, pharmaceuticals and the supply of building material.  Quite the mix!  Anyhow, my card’s recipient listed “sea and beach” among her postcard likes, also adding, “whatever ,I’m pleased to receive any postcard you’d like to send me.”  Well, this card is a bit “sea and beach,” and a bit “whatever!”

Lastly, we come to the top right image, a little bit of mail art.  This is an envelope I created from a worn-out, discarded library book called The Adventures of Jo, Zette and Jocko: The Valley of the Cobras.  It is by Tintin’s creator, Hergé (“Chuck” to his friends).  Looking up this comic series (which was initially published from 1935 to 1958), I learned that Hergé’s biographer stated that the characters were “so colorless that we can hardly bring ourselves to care what befalls them,” and that “Chuck” himself admitted that they “bored me terribly.”

The envelope is full of stamps… 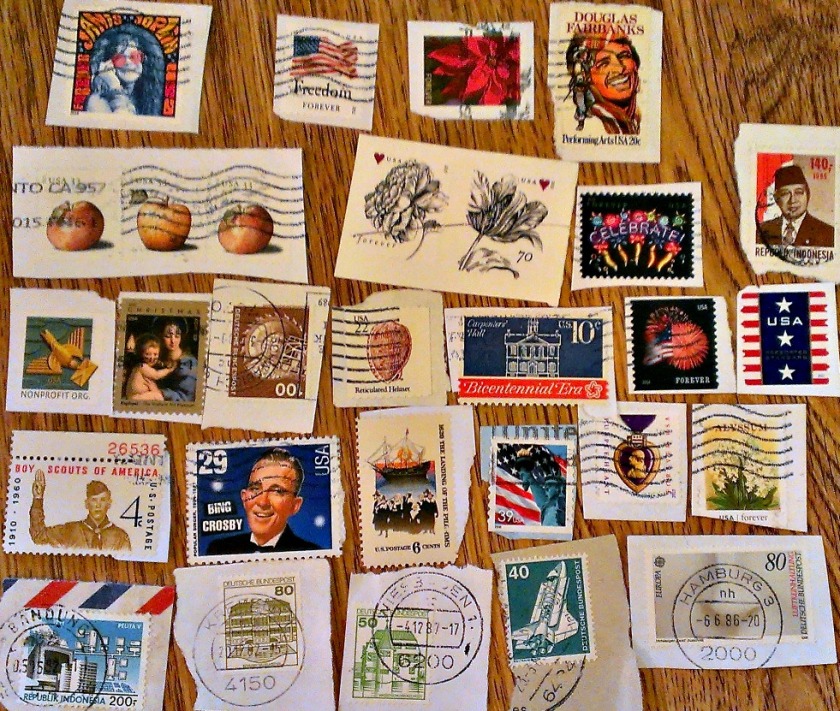 …and is going to Winnipeg, Manitoba, Canada, thanks to a swap-bot trade of used postage stamps.  As I may have mentioned the last time I sent out stamps, I am not even a stamp collector.  It’s quite possible I just entered this trade so I could use my hand-made envelope! Fascinating fact: I created the template for making this envelope by deconstructing the envelope I received in the last swap-bot stamp trade. Also, if you look at the stamps I received last time, you might notice that many of them got reenlisted to head out for this trade!  I was careful, though, not to bore my partner with any Canadian stamps.