It’s going to be quite the session today.  THERE WILL BE  A RANT! 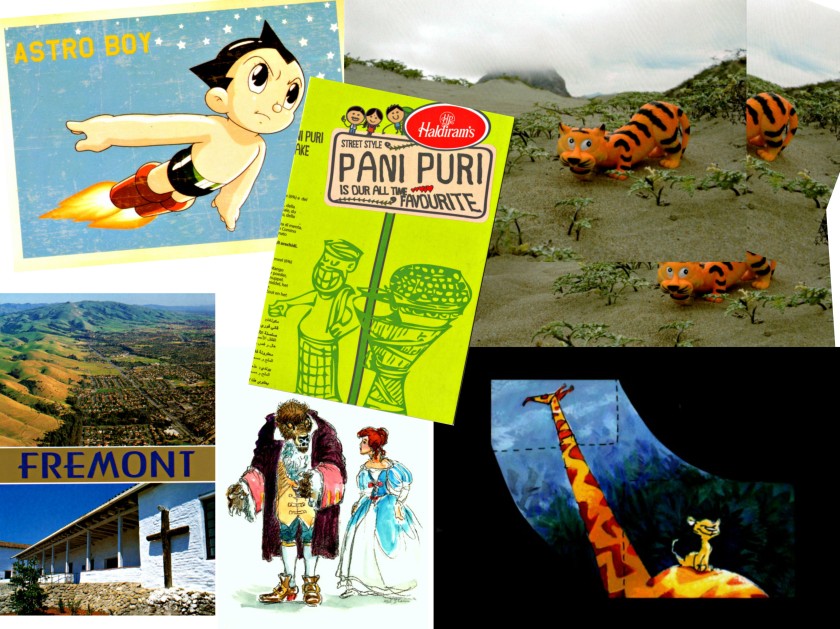 For now, though, let’s start with the tigers.  THREE tigers, going out in 3 Postcrossing draws.  The first goes to Kaohsiung, Taiwan, and I chose this card for her for no particular reason, save perhaps for the fact that she said she’d like to see anything unique from my country.

The next tiger goes to Singapore, and I feel that rant coming on.  CAN WE TALK ABOUT THIS POSTCROSSER IN SINGAPORE?  She has been with the site for more than 8 years.  She has sent nearly 6,500 cards.  And as for her profile?

SHE HAS ABSOLUTELY NOTHING WRITTEN AS A PROFILE.

What is her point in participating in this site?  I mean, to the extend she is even participating; I see the lack of a profile of any kind a complete refusal to participate in the project.  The only reason I chose one of my favorite postcards to send out is that in the absence of any kind of connection between sender & recipient, this card helps me out by having a back story I can write in the message space.  I mean, I hope a message written on the card will not offend this prolific cipher.

The tiger heading for Rotenburg, Germany will be going to an interesting home, I think. This Postcrosser had some very specific requests:

PLEASE WRITE ME BABYNAMES WITH LETTER S ON START
-Please write the date, temperature, distance, how much postage you pay for the stamp and tell me where do you keep your postcards to?

I don’t even know what that last part means.  I fulfilled all of the middle stuff, and ignored the “babynames” bit.  She has internet access.

Astro Boy!  He’s off to Mangalore, India in a Postcrossing Forum Anime/Manga tag.  This Postcrosser writes in his profile, “through Postcrossing I can see your side of the world :-)”

The postcard hewn from a package of pani puri went to Falls Church, Virginia in a food package postcard trade.  That product may not have been the perfect solution for pani puri lovers, but it was definitely fun, and it makes for really great postcards, I think!

The rather boring “Fremont” card is off in a Postcrossing Forum “China Meets the World” trade to Hangzhou, China, to an engineer who said he would like postcards depicting the sender’s city.  I told him I didn’t think these are very good representations. I would certainly snap up postcards featuring the Mission Peak photo on Fremont’s Wikipedia page.  It also shows a small corner of the city’s Central Park, which itself would offer several postcard-worthy scenes.

The last two cards are from the boxed set, “The Art of Disney: The Renaissance and Beyond (1989-2014).”  The Beauty & the Beast card–well, let’s just say I need a postcard secretary.  I scanned the front of the card, but have no record of the other side.  Doing some looking around, the scan date seems to coincide with a swap-bot Disney postcard trade, so that makes sense, yeah.  Apparently I mailed this off to Hollywood, England.

Finally, the Lion King card is off to Xi’an, China, in a Postcrossing Forum Cartoon/Comic Strips/Anime tag.  The recipient is an 18-year-old who likes giraffes, and Disney, and many other things.  She asked that people not write in cursive, because she couldn’t read it.  BOY, have I received postcards I could not decipher!  I do print my cards, though perhaps not always as neatly as I ought.

Here you go: some of the stamps, stamps, stickers, & washi tape: 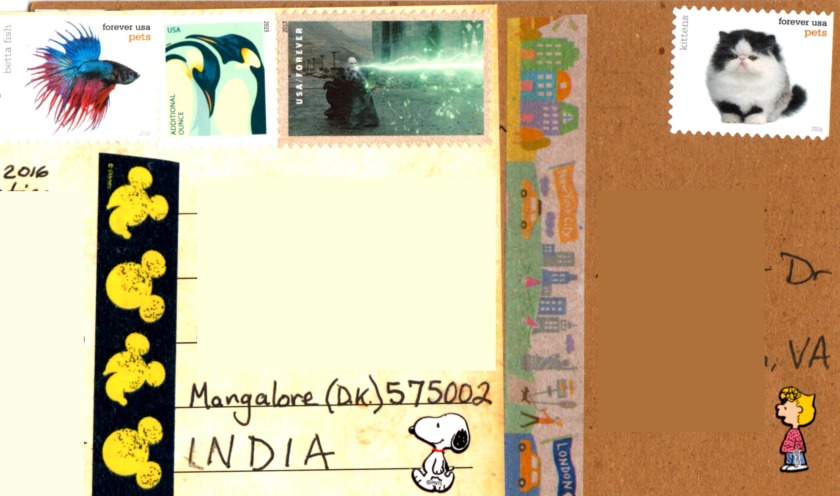 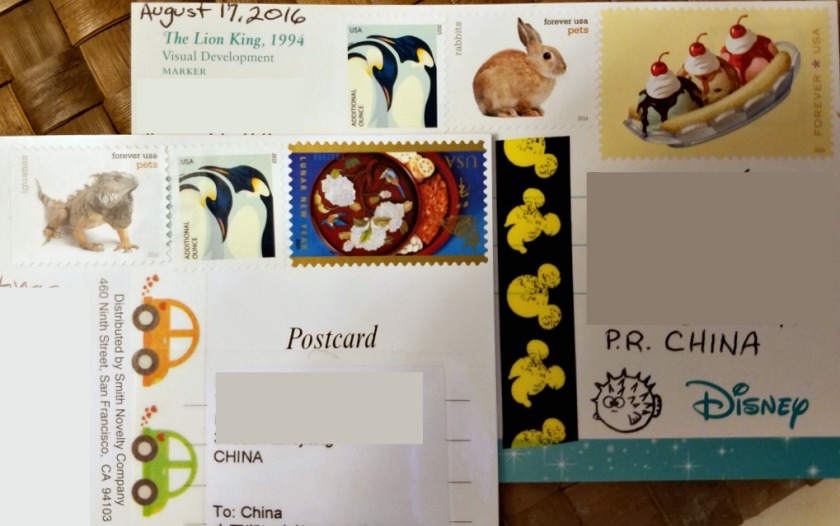