Love that mole card!  Krtek came to me from his homeland of the Czech Republic.  I have seen the character around, but I don’t think I’ve ever seen an episode of his cartoon.  Apparently book versions have been made, because this card’s sender says, “Krteček was my favorite bedtime story.” 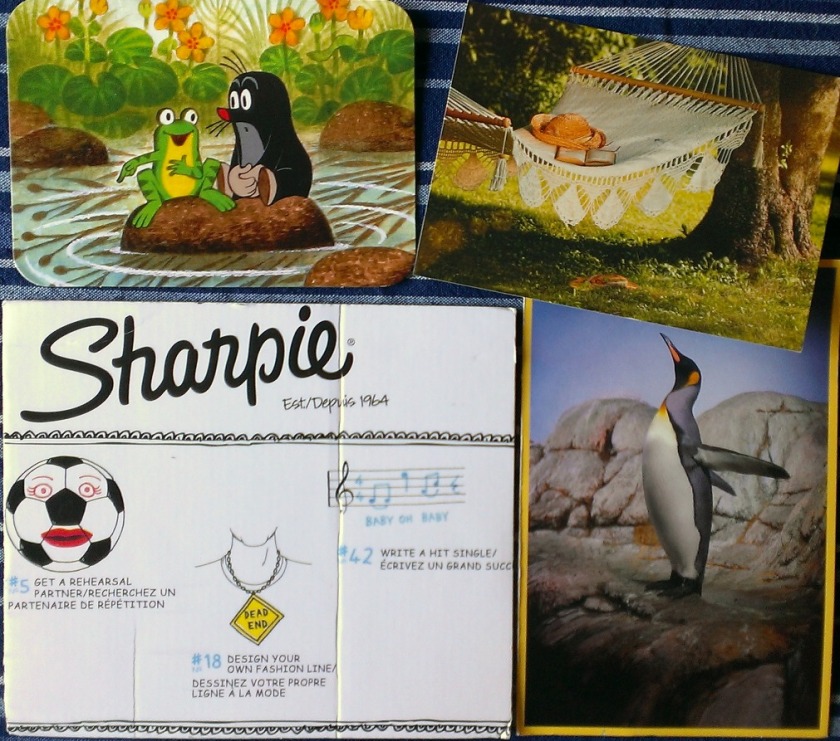 The hammock came from Finland.  I will share with you the entirety of the message from the other side:

“Warm summer greetings from the south of Finland!”

I swear, there was enough white space on the back of that postcard to build two Starbucks franchises.

If you don’t know what to write on a postcard, why send postcards?  Postcrossing doesn’t exactly leave us hanging out here in write-to-a-stranger-land, either: the site offers 20 suggestions of what to write on a postcard. Heck, I’d even be amused if she had slapped on a comic strip from her local newspaper–there was certainly room for that!  At least the bird stamp was very nice.

The big panel-of-Sharpie box is from Canada, thanks to the swap-bot Chunk of Cardboard trade I like so much.  If you look at the bottom-right corner of the stamp scan below, you will get just a peek at the wonderful watercolor dots with which the sender covered the back of the card before stamping, addressing, & writing me a very long note.

The penguin came to me from a swap-bot member in Illinois, U.S.A., torn from a notecard for a “notecard postcard” trade.  She tells me that, like me, she enjoys author Carl Hiassen, and the TV show “Shameless.”  I have slowly been working my way through the original British version of that series, which just kept going & going & going.  Kind of like me, when someone doesn’t write an actual message on their postcard.

Really beautiful stamps this time around! The Canadian ones commemorating the Lunar New Year are especially amazing: may be hard to tell from the scan, but the dragon image is raised, and the ram is embossed with shiny, reflective highlights.