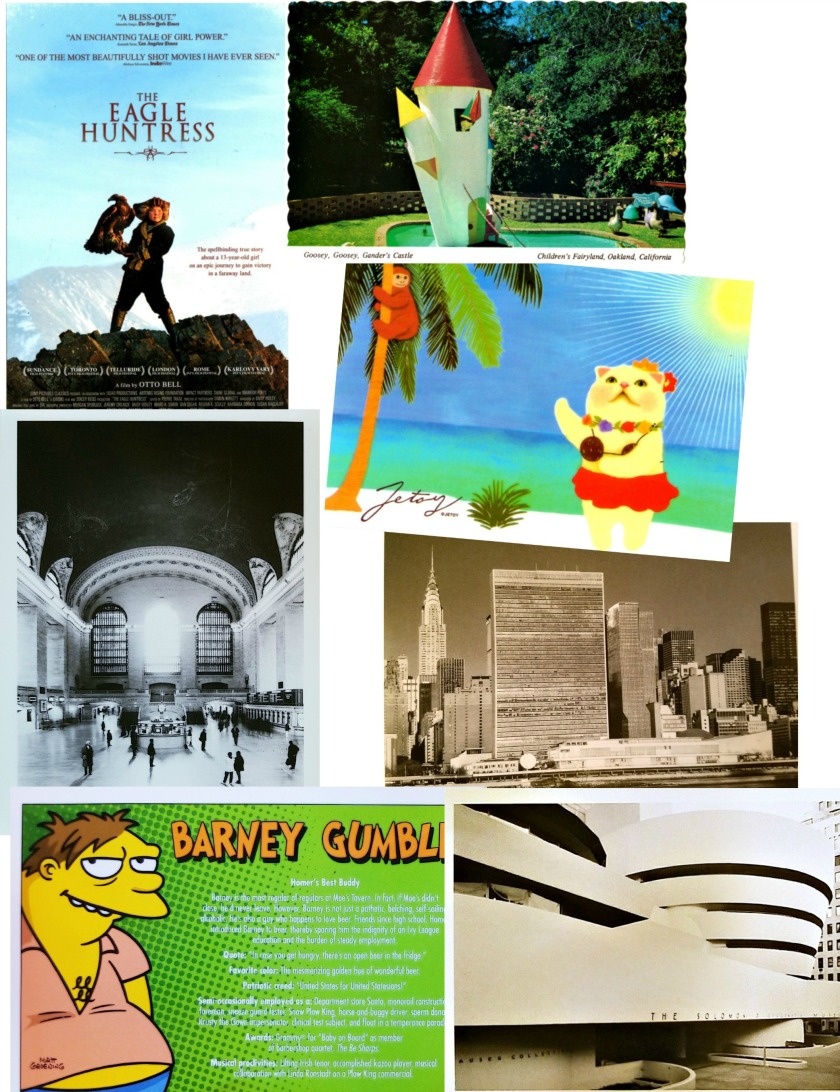 Eagle Huntress went to Laurel, Maryland, for a swap-bot trade of movie/TV postcards.  I haven’t seen this film, but I picked up the card at a local independent theater.

Entering the black & white postcard zone, all from a book of NYC photography I found at a library book sale.  Some people just love b&w photography.  Me, not so much, at all.  Not that I want my old movies & TV series colorized (I DON’T), but I’m just glad rich full color is how we see things these days.

Grand Central headed off to Shanghai, China.  This is actually a resend: I heard from someone whom I’d tagged in Postcrossing Forum some time ago, asking if I’d sent him the card.  I had, but I still don’t want him to miss out.  He’s a train lover, and I’d previously sent him a Skunk Train card–but I am out, and Grand Central was the closest I had to a train card.  By the way, there is a “train of lights” nearby this holiday season, all lit up, and with Santa aboard.  I’ve taken the ride 2-3 times, but honestly?  Well, look at the pics: all the joy is on the outside!  This is also why all of my holiday decoration efforts are focused on the inside of my home, where I can enjoy the fruits of my labor.
The ship shot was a Postcrossing draw, off to Riga, Latvia.  The recipient must not have written much about himself, because I went the dastardly route of talking about the weather.  I try never, ever to do that.  It’s like the saying goes: everyone’s talking about the weather, but no one’s doing anything about it.

The Guggenheim Museum went to Beijing, China, thanks to a Postcard United draw. The recipient likes movies, reading, & travel–and so do I!

Barney Gumble from “The Simpsons” went to Mumbai, India, in a Postcrossing Forum tag trade.  The recipient noted that she likes this show, and I remembered that somehow I happened to have this card.  I told her that as far as I can remember, the last time I saw “The Simpsons” was when the movie came out–back in 2007! My favorite thing about that movie was how some 7-Eleven stores were turned into Kwik-E-Marts!

This just in from Kaunas, Lithuania: my take from the latest swap-bot stamp trade. 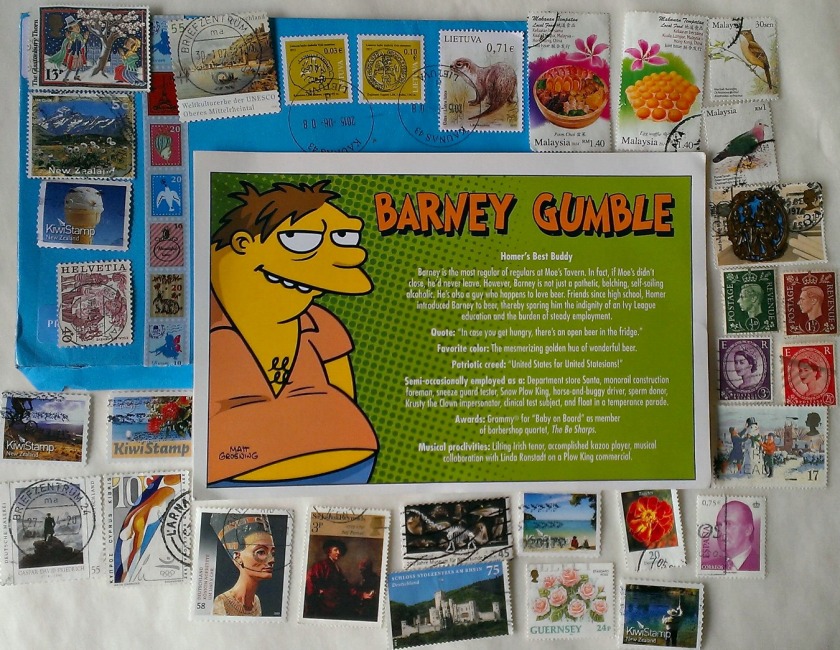 Looks like I got something extra! I’m sure that’ll come in handy in a Postcrossing forum cartoon card trade–if not sooner.

Some nice ones–and I don’t even collect stamps!  I especially love the Malaysian food stamps up at the top.  And the birds right next to them.  And the river otter stamp that is on the envelope!  No idea what to do with them, but they are all beautiful!